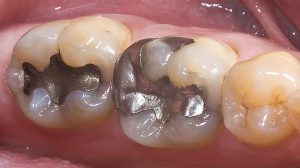 The FDA, under pressure from a lawsuit, has declared that “silver” mercury amalgam dental fillings are harmful. This is a huge development, and those of us that have been vocal about the dangers are pleased that finally the tide is turning. From the Newsweek article:

The FDA had been dragging its feet for so long on mercury in dental fillings that even the judge, Ellen Segal Huvelle of U.S. District Court for the District of Columbia, castigated the agency: “This is your classic failure to act,” she said. (The case is Moms Against Mercury et al. v. Von Eschenbach, Commissioner, et al. The “et al” plaintiffs are other consumer and environmental groups, as well as state officials.)

In a press conference yesterday, the anti-mercury groups claimed victory: “Gone are all of FDA’s claims that no science exists that amalgam is unsafe, or that other countries have acted for environmental reasons only, or that the 2006 FDA advisory panel affirmed amalgam’s safety, all of which are untrue,” said plaintiff Michael Bender of the Mercury Policy Project.

If you have a cracked filling, replace it with a porcelain or composite one. However, I am not recommending that people just get all of their fillings replaced. If you decided to get them replaced, make sure that you are as healthy as you can be, make sure that the dentist uses a dental dam and that you are on oxygen (so that you will not breath in mercury fumes), and have them cut the filling out in pieces rather than drill the filling out.  Safety Precautions During Amalgam Removal.

I have talked to dentists that have told me that they could have a lawsuit brought against them or have their license revoked for stating that amalgam fillings are harmful, at the same time, they have to go spend thousands to safely dispose of old fillings.  Hopefully, this decision will help them talk with their patients openly about the risks of amalgam fillings.