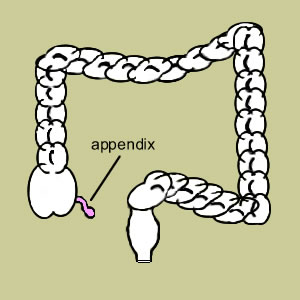 Scientists believe that they have found the purpose of the appendix. It seems that the little appendage that is attached to our intestines is designed be a reservoir and a cultivator of beneficial bacteria. When we are sick and our body purges our bowels, the appendix can repopulate our bowels with bacteria. No mention on the role of antibiotics, which I would think would kill the bacteria even in the appendix. They do state that in the third world (where there is less use of antibiotics), appendicitis is less common. Don’t believe the line in the article that states that it is not needed in the developed world. We can get by without it, but it would be best to have one.
The use of antibiotics kill the beneficial bacteria in the gut, which allows bad bacteria and yeast to flourish. My sense is that appendicitis comes about when the bad bacteria and yeast are being colonized in the appendix. This can lead to a medical emergency, because if it bursts it can kill you.

There are things we can do for prevention. If you think you need antibiotics, there are natural/herbal remedies that can help with infections. If you are on antibiotics, we have lactobacillus and bifidus products to repopulate the gut with good bacteria. If you have a yeast overgrowth or have had large amounts of antibiotics in your lifetime, we use a protocol developed by Michael Lebowitz, to kill the bad bacteria and yeast and restore your gut flora to normal.

thanks to Susanne for pointing the article out to me.