Recently the Royal College of Physicians issued a report “Nicotine without smoke: Tobacco harm reduction”. In it they state that long-term harm from e-cigarettes and vaping is 95-98% less than smoking. The report concludes that  “in the interests of public health it is important to promote the use of e-cigarettes, NRT(Nicotine Reduction Therapy) and other non-tobacco nicotine products as widely as possible as a substitute for smoking in the UK.” I wrote about this landmark paper here. 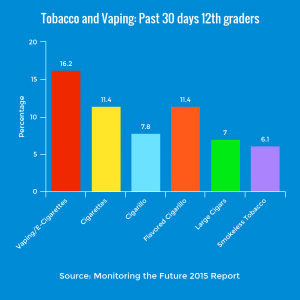 to. It is significantly safer and cheaper than smoking. Because of this, it represents a threat to Big Tobacco and Pharmaceutical Companies as well as to Non-profit and governmental agencies directly and indirectly funded by them. Opposition focuses on an increase in vaping among teenagers, while smoking declines. Vaping flavors are under attack with opponents claiming that these flavors lure teens and becomes a gateway to smoking.

Monitoring the Future is a yearly ongoing study on middle and high school drug and alcohol use.This study provides the predominant data driving drug and health policy and is quoted by the CDC and other governmental agencies. The most recent report states that vaping use now significantly outpaces cigarette use. At the time of questioning, 16% of high schoolers reported vaping in the last 30 days, while 11.4% reported using cigarettes.

Hidden in the study’s data is that the authors consider vaping flavor-only liquid (with zero nicotine) as tobacco use.

Side note: E-liquid (for vaping) is a combination of these ingredients: propylene glycol (a common ingredient in aerosols and safe to inhale), food grade vegetable glycerin, flavorings, and nicotine (which is optional). Cigarette smoke on the other hand contains over 7,000 individual chemicals with 70 known carcinogens. 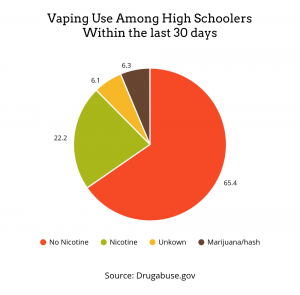 In the chart we can see that 65% of these kids are vaping something that is 95-98% safer than cigarettes and is not addictive. (Data found on page 43)

Interestingly, the chart shows 6.3% vaping with marijuana or hash to get high. Vaping to get high uses a completely different technology from that used with vapes for E-liquid. (Instead of burning/smoking the marijuana or hash, this vaping technology heats the active ingredients until it converts to a gas but before it burns). This data rightfully belongs under a different category of drug use among teens. 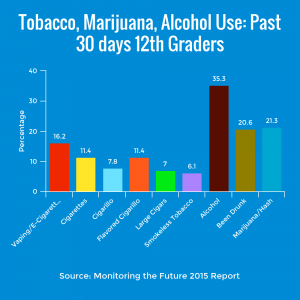 Remember, 65% of the 16.2% of vapers used only flavors and no addictive nicotine.

Clive Bates, a retired civil servant for the Welsh government and outspoken advocate for Tobacco Harm Reduction, looked at the data from 2014 and compared daily vs occasional use in cigarettes and e-cigarettes (vapes). Here is what he states:

“Fewer than 1 in 6 teen e-cigarette users count as what one might call regular users (used on more than 20 days in a month), and more than half are using e-cigs less than once a week.  The proportion of daily or regular users is more than twice as high for smokers compared to vapers. So if you use a 30-day prevalence figure you capture very different behaviours.  The most concerning users are those for whom a consolidated smoking habit is emerging (i.e. the ones who may find it harder to quit later).”

So we have kids that are using something significantly safer, at a much smaller frequency. And most use it without the addictive nicotine.

Opponents of vaping  claim that kids who vape will move on to cigarettes. The Royal College of Physicians, however, saw no such correlation in the UK, and neither do we see it here. If it were true, we would see an increase in tobacco smoking along with the rise of vaping. In fact we see the opposite. Teen smoking is decreasing as vaping increases.

Clive Bates, in his article “We Need to talk about the children: The gateway effect examined”, states that children will do what adults do. A  primary cause of cigarette smoking among teens is cigarette smoking among adults around them. As more and more adults switch from deadly cigarettes to vaping, kids will follow. This is a good thing as it actually contributes to the decline of smoking in society.

I would much rather an at-risk child experiment with blowing no-nicotine candy flavored vape clouds than smoking. While we know that vaping is significantly safer than smoking cigarettes, I will argue that it is also safer than inhaling the tar and carcinogens from marijuana smoke. Because no-nicotine vaping isn’t mind altering and doesn’t affect judgement, an argument can be made that it is even safer than teen drinking.

I do believe that there should be some regulation on vaping, and I think that we should actively discourage teens from trying nicotine vapor. At the same time, I believe that we should know that the flavorings in e-liquid are safe to inhale. That said, the current FDA regulations, which are about to go into effect in August, that treats all vaping (including no-nicotine vaping) as tobacco products is a draconian governmental overreach and needs to be altered.

I do not believe that candy flavors should be removed from the market. Just as adults like flavored vodka and kahlua, adults also like sweet flavors to vape. Sweet and fruity flavors helps the smoker dissociate their nicotine fix with the tobacco flavor. It helps them quit smoking.

In the time that you have read this, three people have died from cigarette smoke in the U.S. This year, 480,000 people will die from smoking, including 40,000 from second hand smoke. That’s like 2-3 jumbo jets going down each day. More than 400 infants will die this year from the effects of their parents’ smoking. We don’t hear about these deaths in the news. It’s been going on so long that we’ve become numb.

Vaping, with rituals similar to smoking, provides us with a huge opportunity for us to save lives. I urge you to educate yourselves on Tobacco Harm Reduction as a rational public policy to combat smoking. Encourage your friends and family members who smoke to switch. Tell your legislative representatives that you want a rational and humane policy towards vaping.

Nearly two thirds of all teen cigarette users smoke Marlboro. Most of the rest smoke either Newport or Camels. Less than 2% smoke other brands. Under the new FDA regulations, these deadly and killer products were grandfathered in before February 15th, 2007 and will continue to be sold and poison our kids for decades to come. Because all e-cigarettes and vapes came into existence after 2007, the new FDA policy will regulate 98% of them out of existence in a little over two years.The FDA will ban a product that is 95-98% safer to protect the sales of Marlboro.  I urge you to contact your representatives to support the Cole-Bishop amendment which moves the grandfather date forward to 2016. This will level the playing field and give us a real chance to save lives.

Here is a pdf of this article that can be printed on 4 pages: But What About the Children? Teen Vaping and E-cigarettes