This is this weeks topic of the week:

16-22 million Americans suffer from gallbladder problems. While most people with gallstones don’t have any problems, many others will have significant pain and problems. The most common symptoms are sudden and severe pain in upper right abdomen, nausea,  and vomiting that occurs after eating. Interestingly 10-15% of patients that have their gallbladder surgically removed will also have these symptoms (postcholecystectomy syndrome).

Initial studies linking gallbladder problems and diet were conducted in the early 1940’s on animals. More recently, one study compared gallbladder emptying after a fatty meal. People with documented gluten/wheat allergies (celiac disease) were compared to those that were healthy. Half of those with wheat allergies avoided gluten, while the other half didn’t. They found that healthy individuals and those on a gluten free diet gallbladders emptied in (on average) 20 minutes. Those that had the gluten allergy and continued to eat gluten (wheat) gallbladders emptied on an average of 154 minutes. 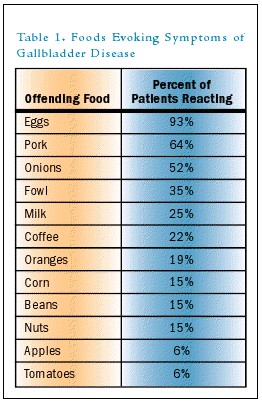 In another study, 69 patients with gallbladder problems were put on a elimination (allergy free) diet. They did not reduce fat intake. All patients were symptom free within one week. After that week, each patient gradually reintroduced foods one at a time. If the patient had gallbladder symptoms after that food, they discontinued it. Eggs, pork, and onions were the most common aggravating foods.

Each patient reacted to different foods and on average needed to eliminate 4 foods. Again, rich, fat, and greasy food were not automatically eliminated.

If you are having gallbladder symptoms (even if you have had your gallbladder removed, and a low fat diet is not alleviating symptoms, you may want to do a elimination diet to see if this clears the symptoms.